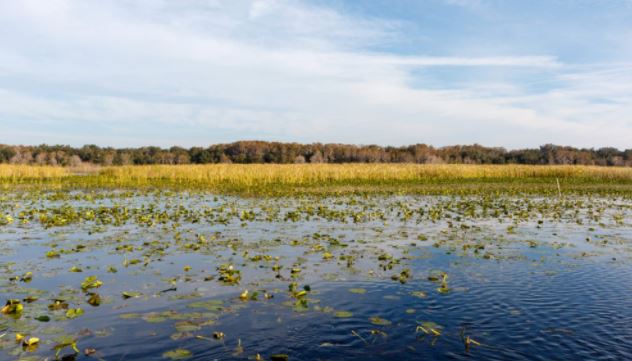 Hydrilla once covered as much as 15,000 acres of Lake Toho. It had negative impacts on all of these uses. Hydrilla has been routinely managed on a large scale to prevent economic and environmental damage. Some fishermen object to large-scale control during their peak season. Anglers are suggesting control be done at some other time. Most anglers targeting trophy bass use live golden shiners during early spring. Shiners are fished inshore near native vegetation or topped-out hydrilla. Postponing control may delay to a time when conditions are less favorable. Hurricane season is not a favorable time of year to remove the hydrilla.

Water temperature must be considered when planning large-scale hydrilla removal. As temperatures rise in Lake Toho each Spring. The water’s ability to hold oxygen is reduced. Oxygen is important for fish and other gilled organisms to breathe. If leaving large masses of hydrilla in Lake Toho during hot summer months may also lead to oxygen depletion. While hydrilla generates oxygen as part of the respiration during daylight hours. It will consumes oxygen during respiration at night and during cloudy days. Warm water temperatures increase oxygen problems especially after several consecutive cloudy days. Hydrilla must be controlled to meet flood control requirements for Lake Toho before hurricane season.

Not long before the hurricanes, in spring 2004, the Florida Fish and Wildlife Conservation Commission enhanced Toho by removing approximately 8 million cubic yards. It was noxious and invasive aquatic vegetation and associated organic material from the lake’s near-shore areas. The project was called Lake Tohopekaliga Extreme Drawdown and Habitat Enhancement Project. The project has two primary focuses: revegetating the fishery and beautifying the lakeside land.

Native vegetation will be reintroduced to the area, both aquatic species and some that will flourish on land nearby. The hurricanes may have set back the independent growth of native species in the northern Mill Slough area after the muck removal. So, revegetating the area with desirable species is important, Landrum said. After the drawdown project and any benefit from the action of the hurricanes in 2004 set the stage for revegetation. The implementation of similar projects on other parts of the lake may follow.

If you would like your chance to catch your fish of a lifetime please select the book now button. BECAUSE your time is now. Lake Toho and Lake Tarpon are available now!!